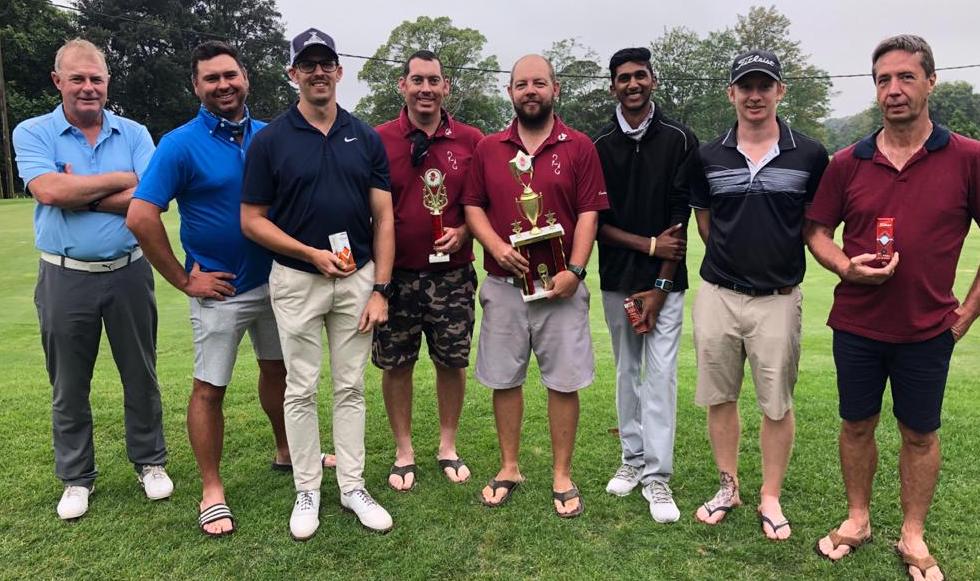 Kloof Golf Club hosted the final Durban League Event of the 2020 Season on Sunday the 15th of November.
A cool overcast day greeted the players for the November Finale, a field that consisted of the Top 10 players looking for a strong finishes to end their Season on a high. Also joining the Tournament was 11 visiting Gauteng League players to take on the Durban players in a Team and Singles Match Play side game.
Andrew Cassells went into the round leading the standings on 212 individual Stableford points, 3 shots ahead of Tiaan Bekker and Kobus Nel in a tie for 2nd.
The day belonged to Rhyan Jeanson, one of the Gauteng players. Rhyan brought his great run of form from Johannesburg to Durban carding a personal best 78 to top the Live Scoring on -4 (40 points) to earn himself his 3rd career league victory and a vital 400 player ranking points which he adds to his Gauteng player standings. Playing off his 12 handicap, Rhyan’s constructed a round consisted of 12 Pars, 4 Bogeys and 2 Doubles Bogeys.
The Season came down to the Final hole, where Tiaan Bekker secured a Par on the Par 3.- 18th for a +5 (31 point) finish to leap Andrew Cassells (carding +10 on the day) to first place to Top the standing on 240 point, 2 shots ahead of Kobus Nel and 3 points ahead of Andrew Cassell on 237 points.
Congratulation to Tiaan Bekker for becoming the First Durban Sunday League Champion!
The KZN vs JHB Team Challenge went in the favour of KZN with them winning 3 matches to JHB’s 2 wins. Andrew Godfrey and Andrew Cassells taking down Danie Geldenhuys and Leonard Nel 3&2. Tiaan Bekker and Marius Engelbrecht beating Paul Ricketts and Owen Kenny 2&1 and Andrew Broughton and Ashwin Ramchad beating Robert Michael and Caesar Kenny 4up.
The Singles went in favour of Team JHB with the visitors winning 6.5 points out of the 10 matches. Once the Team points and Singles points were all compiled Team JHB took the bragging rights 8.5 to KZN’s 6.5.
There is all to look forward too for the 2021 Season, with 11 League games and 2 Majors featuring on the Tour Calendar.
To Join the Durban Social League email us on: durban@duckhookgolfers.co.za

Closest to the pin: Ross Henry

The Durban Tour Calendar now features 8 League Events with each Event being played at a Different golf course in and around Durban. Each event will be an Individual Stableford format, requiring players to accumulate points over 18 holes.

The Tour will also feature a season ending Major, the Masters on the 6th of December which will be the first Medal event.

Player Ranking points will be allocated to each finishing position and the player with the most points at the end of the Season will be crowned the Player of the Season.